Born in Russia, Lina Zeldovich grew up in a family of Jewish scientists, listening to bedtime stories about volcanoes and black holes. As a child, she watched her grandfather fertilize the family’s organic orchard with composted sewage and thought that the whole world did the same. Now a prominent writer, editor and Columbia Journalism School alumna, she has written about ecology, health and sustainability for major publications in the United States, Canada and the United Kingdom, including The New York Times, Reader’s Digest, Smithsonian, Scientific American, and Popular Science, and has appeared on radio and television. Having won four awards for covering the science of poo, she focused her book on the novel solutions to the world’s oldest problem—keeping humans free from their own excrement. In writing The Other Dark Matter, she toured a slew of smelly sewage plants, hopped over many stinky street gutters, stuck her nose into a stool bank—and lived to tell the story. When she isn’t digging into humanure in India, Madagascar, Kenya, or North America, she lives in New York City and tends to a compost pile in her backyard, just like she did with her grandfather years ago

2020: American Society Of Journalists and Authors (ASJA) Covering Crisis Award for reporting on the Coronavirus pandemic.

Welcome To The Other Dark Matter! Now Discover Your Own Organic Power Within

The average person produces about four hundred pounds of excrement a year. More than seven billion people live on this planet. Holy crap! 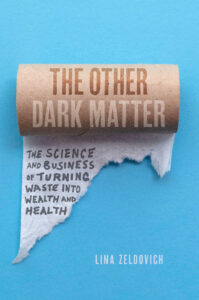 Because of the diseases it spreads, we have learned to distance ourselves from our dark matter, but the long line of engineering marvels we’ve created to do so—from Roman sewage systems and medieval latrines to the immense, computerized treatment plants we use today—have also done considerable damage to the earth’s ecology. Now scientists tell us: we’ve been wasting our waste. When recycled correctly, this resource, cheap and widely available, can be converted into a sustainable energy source, act as an organic fertilizer, provide effective medicinal therapy for antibiotic-resistant bacterial infections, and much more. Hygienic waste repurposing can help battle climate change, reduce acid rain, and eliminate toxic algal blooms.

Grossly ambitious and fully scientific, THE OTHER DARK MATTER shows how human excrement can be a life-saving, money-making resource—if we make better use of it! So let’s start doing it now. My dear fellow humans, please use your innate organic power for the greater good. Don’t just sit there and let it go to waste!

THE OTHER DARK MATTER is available for preorder on Amazon