Sun And Smartphone Power High-Tech Test For Cancer in Africa 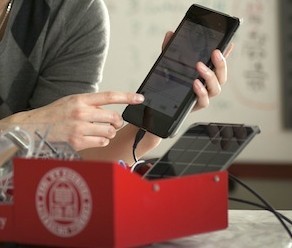 In 2010, Ethel Cesarman, a pathologist at New York City’s Weill Cornell Medical Center, was working with scientists running clinical trials on Kaposi sarcoma (KS), a cancer of the connective tissue characterized by bluish-red or purple bumps on the skin.

In the Western world, KS affects mostly older men of Mediterranean heritage. In Africa, though, it’s common in young adults and children, and has a high mortality rate in people under 40. It also often occurs as a side effect of AIDS. “In Africa it’s a big problem,” says Cesarman, who had been a part of the team that in the mid-1990s discovered that KS, originally identified by dermatologist Moritz Kaposi over a century ago, is caused by a human herpesvirus. “For some reason, KS is endemic in Africa.”  Read Full Story